Rodriguez brings over two decades of experience in both the public and private sector. He serves as the Chief Executive Officer of the Building Industry Association of Southern California Baldy View Chapter and serves on the Southern California Association of Government – Transportation Committee, League of California Cities – Orange County Division, and has been awarded the “Corporate Advocate of the Year” from the California Hispanic Chamber of Commerce. Rodriguez was also recently appointed by State Treasurer Fiona Ma to the Housing, Economic Development, Jobs and Opportunity Zone Ad Hoc Committee.

“I’m honored to have received the unanimous appointment by each of the Orange County Cities and will work to continue South Coast AQMD’s pursuit of clean air to protect the health of families throughout our service area.” said Councilman Rodriguez.

Rodriguez also brings experience working with a multitude of businesses and governmental agencies while at a statewide public affairs firm and having worked as a senior communications director in the California State Senate.

Additionally, Rodriguez served as an adjunct faculty staff at California State University, Fullerton and Chaffey College in Rancho Cucamonga. He was previously appointed by Governor Arnold Schwarzenegger to the California Commission on Aging to help address housing, health care, and other elderly quality of life issues.

During his tenure of public service, Yorba Linda has enjoyed economic growth with the opening of the Yorba Linda Town Center. The City also broke ground on the Yorba Linda Public Library and Cultural Arts Center – a significant investment in lifelong learning for next generation of residents. Rodriguez has also made public safety a top priority, as Yorba Linda was recognized by “SafeHome.org” as the safest city in California.

South Coast AQMD is the air pollution control agency for Orange County and major portions of Los Angeles, San Bernardino and Riverside counties, including the Coachella Valley. For news, air quality alerts, event updates and more, please visit us at www.aqmd.gov, download our award-winning app, or follow us on Facebook, Twitter and Instagram. 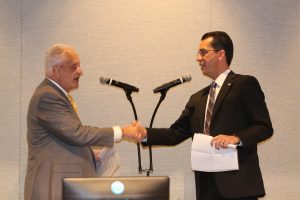